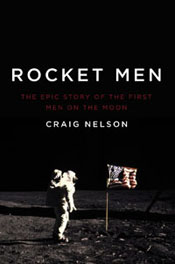 For the first time, an award-winning historian tells the full, epic story of the Space and Missile Race and its dramatic conclusion: the first moment when humankind set foot on another planet.

On May 20, 1969, the thirty-story-high Apollo 11-Saturn V spaceship was trundled from Cape Kenendy’s Vehicle Assembly Building to the distant loneliness of Pad 39A for its final inspection and countdown. The missile had 6 million parts, which meant that, under NASA’s rigorous insistence of 99.9% reliability, as many as 6,000 could fail. The nearly one million spectators who began gathering at the Cape were kept at least 3.5 miles away from the pad because, in the event the rocket exploded, it would hurl 100-pound shrapnel a radius of 3 miles with 4/5ths the power of an atomic bomb. Finally, , at 9:32 a.m. on July 16, Neil Armstrong, Buzz Aldrin, and Mike Collins lifted into the skies on the greatest adventure in modern history: the first trip to the Moon.

Restoring the drama, majesty and sheer improbability of an American triumph that have now come to be taken for granted, ROCKET MEN is the complete, definitive and thrilling account of that glorious achievement, from the origins of NASA’s spaceships as Nazi wonder weapons, to the lives of the men and women who created this miracle. When President Kennedy proposed a moon landing within a decade as the most effective way to take the lead in the space race after the shocking Soviet achievements of Sputnik and Yuri Gagarin’s first manned orbit, even NASA’s most zealous engineers were aghast. But thanks to a stunning and unprecedented effort of planning, technology and execution, the Eagle lunar module successfully touched down on the moon’s surface, and a star-struck world watched as Armstrong took his astonishing small step.

Through interviews, 23,000 pages of NASA oral histories, and declassified CIA documents on the space race, Craig Nelson offers a grippingly vivid and detailed narrative of the Apollo 11 mission, from its crew’s inconceivably arduous training to the stresses of finding themselves media stars on the global stage after their return, from the mundane (the astronauts’ final breakfast on earth was steak and eggs, low in fiber and low in waste), to the remarkable (the lunar samples brought to earth by the Apollo missions revealed the Moon’s origins) to the unintentionally comic (NASA designers had neglected to place a handle on Eagle’s outside door, which meant that Armstrong and Aldrin had to make sure to leave it cracked open while they walked on the Moon).

ROCKET MEN is the story of a twentieth-century pilgrimage; a voyage into the unknown motivated by politics, faith, science, and wonder that changed the course of history. But the story of Apollo 11 is, in the end, fundamentally a human one, featuring the genuinely heroic – and idiosyncratic – astronauts, their stoic wives, distracted children, and the tech teams at Mission Control (which always smelled of burned coffee, cigarettes, and Mexican takeout), all of whom are unforgettable characters in this thrilling account of this journey to one of the last frontiers of the human imagination. It is a book to make you cheer for what mankind can accomplish in spite of nearly insurmountable odds.