Enlightenment, Revolution, and the Birth of Modern Nations 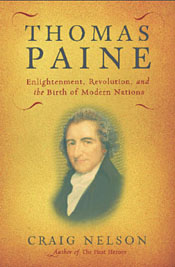 Between his birth into a poor family in Thetford in 1736 and his burial in an unmarked grave, Thomas Paine became a popular hero who influenced the birth of America and France. This biography not only explains how this was possible, but also analyses the revolutionary period that he was fundamental in shaping. Almost everything Thomas Paine tried his hand at in his youth, including marriage, ended in abject failure. But steeped in the thinking of the enlightenment, he went to America and in no time wrote the book that established his reputation forever more: “Common Sense.”

After leaving for Europe with a radical design in his pocket for an iron bridge that could be mass-produced, his anti-monarchist bestseller, “The Rights of Man” provoked such a furore that he was forced to leave England on pain of death. And in France, he found himself caught up in the reign of terror and only narrowly escaped execution…A formidable researcher, Nelson describes Paine’s fascinating life and times with exceptional narrative skill and the kind of gusto that Paine himself would have been proud of.